People in cities across the country marched and rallied over the weekend against separation of families at U.S. borders. On Saturday, nearly one thousand individuals participated in the Families Belong Together march and rally in Downtown Bakersfield.

Those in attendance were small children, educators, and community organizers including Women’s March Kern County, the United Farm Workers Foundation, and the California Nurses Association. All groups participating in the march from the Immigration and Customs Enforcement Office on Truxtun Avenue toward the Kern County Superior Court Building just blocks away.

As the temperature continued to rise, so did tensions.

At one point, a man disrupted the peaceful protest after noticing one supporter waving an American flag upside down.

Pastor Mike Sutherland of Mill Creek Christian Church in Bakersfield offered a message of unity during the disagreement.

“We all need to come together. This is about families. This isn’t about political parties. This is about kids being separated from their moms and dads and that should be something that all of get united behind,” said Pastor Sutherland.

Tracy Marcial is a Bakersfield native and brought her two young children to Saturday’s rally. For her, the situation is more than a teachable moment.

“My husband and her father is from El Salvador and he immigrated here when he was six and we want to support people coming here for a better life and to keep families together,” said Marcial. “Definitely having kids now and imagining them being taken away is unfathomable," says Marcial. 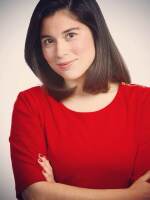 Christina Lopez
Christina Lopez is a freelance reporter based in Bakersfield. She contributes reports to Valley Public Radio.
See stories by Christina Lopez
Become a KVPR business sponsor.
Looking to give your business a boost? Find out how KVPR can help you build awareness.
Learn more
Latest news