Ask Me Another Brings Puzzles, Humor to Valley Public Radio

Puzzlemaster Will Shortz and Wait Wait... Don't Tell Me! host Peter Sagal walk into a bar... No, it's not the start of a joke. It's the essence of Ask Me Another, a rambunctious hour that blends brainteasers and local pub trivia night with comedy and music. Host Ophira Eisenberg invites in-studio guests and listeners alike to stretch their noggins, tickle their funny bones, and enjoy witty banter and guitar riffs from house musician Jonathan Coulton.

For an hour, listeners can play along as Eisenberg puts questions to a rotating band of puzzle gurus, audience members and special mystery guests, who then takes a turn in the contestant's chair facing trivia games written especially for him or her. What you'll hear resembles the casual intimacy of game night at a friend's house: one where scores are forgotten in favor of hilarious gaffes.

The puzzle gurus behind Ask Me Another include John Chaneski, who devised tough questions and answers for "Who Wants to Be a Millionaire" before becoming one of the "puzzle guys" on the radio program "A Way With Words"; Art Chung who has written for and produced television game shows including "Who Wants to be a Millionaire?," "Cash Cab," "The World Series of Pop Culture," and "Stump the Schwab"; and actor/writer Will Hines who has performed and taught improvisational comedy at the Upright Citizens Brigade Theatre for years, and obsessively reads books on compiling baseball statistics, a task he will never have to do.

Ask Me Another is recorded live at The Bell House in Brooklyn, NY. 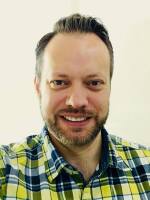 John English
John English is the Membership Manager for KVPR. He is the person to contact about your KVPR membership, how to support the station, vehicle donations, and any other questions you may have about how you can help the station.
See stories by John English