Franz Weinschenk reads “A Hike down Colony Mill Road.”  Story is about an unhappy group of sailors from San Francisco known as the “Kaweah Colony,” who built a saw mill at the 5,000 foot level in what it now Sequoia National Park. It took them four years to construct a 10-mile road up to the saw mill, but they were forced to vacate once the national park was established. 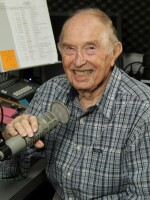 Franz Weinschenk
Franz Weinschenk, his parents and his older brother Fritz were indeed lucky to get out of Germany just before World War II. For a while they lived in Brooklyn, N.Y., before moving to Madera, CA. He graduated from Madera High and Fresno State. From 1948 to 1952 he taught at Edison High School in Fresno after which he was drafted and served in the US Army for two years.
See stories by Franz Weinschenk
Related Content