Southern California’s reliance on Kern County’s prolific groundwater banks for drought insurance could be jeopardized by a chemical known as 1,2,3-trichloropropane (TCP).

The cancer-causing agent has been found in several large groundwater banking operations in Kern and a first look at how much it may cost to clean up is a doozy.

Up to $465 million, according to a recent feasibility study of the Arvin-Edison Water Storage District banking operation.

And that’s just one of Kern’s water banks used by urban partners to store, or “bank,” water in flush years and retrieve it during drought.

Together, those banks have stored and returned hundreds of thousands of acre feet to urban customers for drinking water. Kern has far more groundwater banks, but most are used for aquifer recharge or irrigation water, which doesn’t have a standard for TCP.

“The big picture here is that the (clean up) dollars are massive because we’re talking about such massive volumes of water,” said Attorney Todd Robins, who represents Arvin-Edison.

The district is suing Dow Chemical and Shell Oil over the TCP, which it alleges is a byproduct of a nematode fumigant made by the companies and that was widely used on the valley’s farmland from the 1950s to the 1980s.

Robins also represents Semitropic and co-plaintiffs Rosedale-Rio Bravo and Irvine Ranch in separate lawsuits against Dow and Shell. Kern Delta is represented by another firm and has not sued.

Shell did not respond to a request for comment.

A Dow representative disputed whether TCP currently detected in water bank wells is from its fumigant.

“Dow’s soil fumigant products were continuously evaluated and approved for use by federal and state regulators,” wrote J.D. Sterba, head of Dow communications in an email. “The plaintiffs’ claims in these cases are based on a California water quality standard that went into effect in 2018, several decades after the product formulations in question were discontinued.

“To the extent TCP was present in past product formulations, it would have been at levels so low as to pose insignificant environmental risk.”

Dow and Shell have settled dozens of TCP contamination cases brought by drinking water purveyors from Ceres down to Bakersfield. The suits began pouring in after the state Drinking Water Division set the TCP standard at five parts per trillion – the equivalent of five grains of sand in an olympic sized swimming pool.

“At the end of the day, you’re trying to pump groundwater and instead of putting it into a drinking water system, you’re putting it into the California Aqueduct where it still has to comply with maximum contaminant levels set by state law,” he said. “The only real difference is scale.”

Though smaller drinking systems began grappling with TCP cleanup in 2018, it hadn’t been a front-burner issue for groundwater banks until 2020 when drought engulfed the state and Kern’s urban banking partners had to call on their stored reserves.

Several banking operations were able to limp through that year and 2021 by delivering water straight from the Sacramento-San Joaquin Delta and Friant-Kern Canal or blending banked supplies with uncontaminated supplies. That’s likely to continue if 2022 is another dry year.

The bigger issue, at least for Arvin-Edison, is the giant Metropolitan Water District of southern California has stopped storing water in the district since TCP was discovered, as SJV Water reported back in 2020. That means a loss of fees and water.

That is one of the reasons Arvin-Edison is moving quickly in its contamination cleanup efforts, Robins said. Based on the feasibility study recommendation, the district has already put out design proposals and is anticipating getting bids back in April.

The feasibility study recommended filtering water through gravity flow granulated carbon systems to be built at each of Arvin-Edison’s spreading ponds. Construction along with operations and maintenance costs over 50 years were estimated at $465 million.

Robins said Arvin-Edison’s lawsuit is the furthest along, but he is hoping to get Semitropic’s case moving on the same track. TCP cases throughout the state are all heard in San Bernardino county.

This story was written by Lois Henry, CEO/Editor of SJV Water. Henry is also the president of Brock Mutual Water Company, which has TCP in its wells above the maximum contaminant level allowed by California. In 2016, Brock hired Attorney Todd Robins who sued Dow Chemical and Shell Oil companies on Brock’s behalf for TCP contamination. A settlement was reached in 2019. 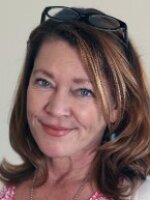 Lois Henry
Lois Henry is the CEO/Editor of SJV Water.
See stories by Lois Henry
Become a KVPR business sponsor.
Looking to give your business a boost? Find out how KVPR can help you build awareness.
Learn more
Latest news
Related Content