Commentary: The War On Thanksgiving?

I miss the days when Thanksgiving felt as big as all of California.

When I was growing up in Pasadena, we’d drive out to my great grandmother’s place in Redlands, 60 miles east of Los Angeles in San Bernardino County. Somehow, more than 40 members of my mom’s extended family squeezed into that little house, less than 900 square feet on Ohio Street; the overflow would end up in the backyard. Uncle Shelby and Aunt Doris’s big family—they had 10 kids—would make the drive down from Modesto. Uncle Dale and his boys would come over the Cajon Pass from Apple Valley. Aunt Nadine and her brood would make the trip from Victorville.

The only thing bigger than the guest list was the spread. There was simply too much food—turkey, ham, prime rib, stuffing, green beans, and every conceivable side dish—to fit in the kitchen or the small dining area, so Great Grandma would lay dishes out in the backyard on tables borrowed from her church. The children spilled out beyond the property onto the street, where we played touch football.  One year I remember asking my mother, the oldest of 22 first cousins, whether I was really related to all these people. “Pretty much,” she said, “though a couple of teenagers have brought their boyfriends or girlfriends.”

Those Thanksgivings are long gone. Great Grandma has been dead for nearly 20 years, and, in recent years, Thanksgivings have been getting smaller for my family—and, most likely, yours as well.

The larger problem for Thanksgiving is that nearly all of its major elements - family, travel, eating, football - face unrelenting governmental, demographic or cultural pressure. This is especially true in California, a progressive state that cares less and less for big things - be they families, food portions, or cars.

I fear that Thanksgiving has lost some of its power to hold our attention and bind us together. Part of this has to do with incursions from sexier holidays. Halloween, having grown into a party for adults as well as kids, has crowded Thanksgiving from one side of the calendar. On the other, Christmas is all but making war on Thanksgiving, with the Black Friday sales of major retailers starting earlier and earlier each year, to the point that they are encroaching on Turkey Day itself.

But the larger problem for Thanksgiving is that nearly all of its major elements—family, travel, eating, football—face unrelenting governmental, demographic or cultural pressure. This is especially true in California, a progressive state that cares less and less for big things—be they families, food portions, or cars.

California families have gotten a lot smaller. This generation of child-bearing California adults is simply having fewer children—fewer than 2, on average—than its predecessors. The state’s comparatively dismal support for K-12 schools and rapidly declining support for higher education don’t exactly encourage children; neither does a recent cut in the state tax exemption for children. And after a generation in which California has lost more people to other states than have come here, many California families are scattered more widely. That’s true of my family. Once frequent attendees in Redlands now live in Nevada, Arizona and—in an incomprehensible (to me) reversal of our Dust Bowl migration—Oklahoma and Missouri.

One result: fewer people are traveling for Thanksgiving, according to AAA figures (although those who do are traveling farther than they used to). Gas, despite recent dips, is still expensive. Roads are in disrepair and have not been expanded to accommodate traffic. And this Thanksgiving, the transportation lobby’s gift to California drivers was the filing of a new ballot initiative that would more than double the vehicle license fee.

California’s politicians also aren’t fond of the two great American pastimes: overeating and football. Ours was the first state to require restaurants to display calorie counts on their menus, and it’s open season here on sugary drinks. And in recent years football has faced both new laws on the treatment of young players with head injuries and, in some districts, budget cuts by school boards targeting expensive high school programs.

Let me be clear: most of the time, limits on food and football make a lot of sense. But Thanksgiving should be different. On the one holiday all of us—regardless of politics or religious affiliation or immigration status—can celebrate, excess should not be a sin.

Thanksgiving is the day when we should be able to be ourselves, eat as much as we want, and spend the day with as many loved ones as possible. Never has such a holiday been more important than now, when our culture celebrates minimalism, when the very wealthy (and those who aspire to great wealth) brag about their ability to eliminate clutter from their lives. And let’s be honest—a lot of the clutter they want to eliminate is the messiness of other people.

So I urge you to have as big and as full and as messy of a Thanksgiving as possible.

This year, my parents, my wife, our three kids and my brother and sister will head out to Redlands. We’ll be at my Great Aunt Fern’s house in the hills, and there won’t be even half as much food or half as many people as we used to have at Great Grandma’s. But I will be making Aunt Fern’s chocolate pie, a recipe that includes two ounces of unsweetened chocolate, four eggs, a cup and a half of sugar, and—the following is not a misprint—two sticks of butter.

Yes, I know it’s too much. It’s what Thanksgiving should be. 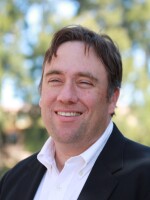 Joe Mathews
Joe Mathews is the California editor of Zócalo Public Square, a not-for-profit daily Ideas Exchange that blends live events and humanities journalism. He is the author of The People’s Machine: Arnold Schwarzenegger And the Rise of Blockbuster Democracy and coauthor of California Crackup: How Reform Broke the Golden State and How We Can Fix It, books that established him as one of the premier translators of the state’s politics and policy. Previously, he was a reporter for the Los Angeles Times, The Wall Street Journal, and the Baltimore Sun.
See stories by Joe Mathews
Become a KVPR business sponsor.
Looking to give your business a boost? Find out how KVPR can help you build awareness.
Learn more
Latest news
Related Content